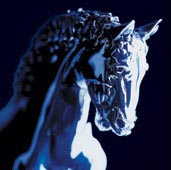 "Master of images in motion, Leonardo recognizes in a horse the most dynamic figure of excellence and proceeds in making the Horse symbol of his host city, Milan. It could hardly find a better and more appropriate award to glorify the masters in the Art of filmmaking.”
Prof. Carlo Pedretti

On his deathbed Leonardo Da Vinci expressed only two regrets, he had never flown and he had not finished his equestrian statue. Now this statue is the symbol of Milan and Independent Cinema all over the world.

It's taken five centuries, three patrons, a series of sculptors and six millions dollars to make one of Leonardo's most ambitious projects. Two identical sculptures were made. One donated to the city of Milan and positioned at the Hippodrome and one placed in Michigan, Grand Rapid, at the Frederik Meijer Garden. Standing at 24 feet and weighing over 15 tons, these Horses represent a closing of the circle on the history of this monument "…can be considered a symbol of creative power and energy, a vision aiming and focusing into a distance goal " (Nina Akamu).

1493 A full-scale clay model of il Cavallo (Italian for "The Horse") is completed and displayed publicly.

1494Sforzas are threatened militarily; bronze intended for The Horse sculpture is used instead for cannons.

1499 French invade Milan; French army destroys clay model and the molds. Valuable evidence of sculpture is lost. Da Vinci is haunted by lost sculpture throughout the reminder of his life.

1966 A set of notebooks that contain key sketches by Da Vinci relating to the molding and casting process are discovered in Madrid's Biblioteca Nacional.

1994 Charles Dent dies; donates part of art collection towards completion of project. Dent's wish is to give sculpture to Italians as a gift on 500 hundreds year anniversary of clay model's destruction.

1996 Hank Meijer, son of Frederik and Lena Meijer, reads in the New York Times about Dent's efforts to build Horse sculpture. Hank shows article to Fred Meijer, who calls the da Vinci group. Fred Maijer decides to become a key financial backer with the understanding that Frederik Maijer Gardens will acquire its own casting of Horse sculpture, the only other in the world. 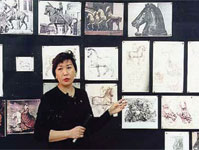 1998 Professional artist Nina Akamu is hired and she starts from scratch to build an 8-foot clay model. Model combines the intents of Leonardo's drawings with Akamu's creative interpretation. In preparation, Akamu meets with scholars and Leonardo's expert, analyzes and studies the anatomical composition of horses.

1999 The dream is now reality. Two Bronze Horses are cast from clay models in multiple parts and welded together. The Horse sculptures will be unveiled in Milan, under SNAI guidance, September 10 and at the Frederik Meijer Gardens on October 7.

2000 After being made, now two times, the dream replica again. Andrea Galante, founder of MIFF - from English acronym Milan International Film Festival - proposes to Leonardo's Horse, Inc. and SNAI to utilize the horse as an award for the movie event.

2001 After one year of conflicts and debates, Andrea Galante's vision is realized; Leonardo's Horse becomes the MIFF Award for MIFF Best Film, the equivalent to Holliwood's Oscar statuette.

2005 Likewise Hollywood’s Oscar, the Leonardo’s Horse multiplies and is made in copies for all the different MIFF’s award’s categories.