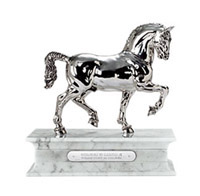 Film is by far the most dynamic and visionary art form, which most directly appeals to the senses. Leonardo Da Vinci Film Society recognizes the Art of Filmmaking as the outcome of a synergic collaboration of talented individuals active in those disciplines contributing to accomplish their vision into the movie and awards those artist-filmmakers in their respective field with the Leonardo's Horse or Da Vinci Award.

Prof. Carlo Pedretti - the leading expert on Leonardo Da Vinci - congratulated the Milanese Film Society for the brilliant implementation of the prestigious Leonardo's Horse Award, the equivalent to Hollywood's Oscar@ statuette. Master of images in motion, Leonardo recognizes in a horse the most dynamic figure of excellence and proceeds in making the Horse symbol of his host city, Milan. The city of Milan could hardly find a better and more appropriate award to glorify the masters in the Art of filmmaking.” - Prof. Carlo Pedretti.

Among the Nominee Films or other works not inclued in the program, if there shall be the conditions of presentation with reason related to specific nominee films, in addition to the Official Leonardo's Horses, other Awards could be proposed annually such as:

Among the Short Nominee Films, if there shall be the conditions of presentation with reason related to the program, in addition to the Official Leonardo's Horses, other Awards could be proposed annually such as:

In the 1st edition, awards were created by the Milanese Artist Giuseppe Rizzi. In the following years different artists joined Rizzi to create some of the MIFF awards. In previous editions, the artists creating special awards have been (in alphabetical order): Giovanni Giannini, Renato Missaglia, Giuseppe Rizzi, Vaifro Spaggiari, Ernesto Treccani.